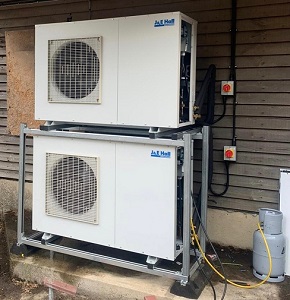 J & E Hall's new Cellar Plus units are the toast of a rural Kent brewery after providing the ideal solution to a cooling problem.

Two J & E Hall Cellar Plus units, running on R448A have been installed at the Wantsum Brewery near Margate, helping to keep its award-winning range of traditional ales and craft beers in the best possible condition all year round.

The brewery, on an old farm at St Nicholas at Wade, produces ten core beers, including Black Prince, Fortitude and Dynamo as well as some seasonal specials. The beers, many named after historical Kent events and figures, feature IPAs, best bitters, porter, stout and mild. Head brewer Andrew Dudley explained: "In the summer the problem was that the temperature could get up to 20-odd degrees – too high for storing ales, especially cask ales if you are not selling them quickly enough. We needed a solution to maintain the temperature at 12-15°C.”